Computer Notebook: The Rise of the Smartphone

Previously, I observed how Windows 10 represented an advance in desktop operating systems. However, Windows 10 failed1 to sustain its attempt to be an operating system for mobile phones. During the middle of the second decade of the 21st century, patterns in platform use showed that mobile phones had come to match and then exceed the market share among desktop, mobile, and tablets. Here is a platform comparison from 2009 to the start of 2022:

But how did this come to be?

The Road to Mobile Phone Dominance

Mobility Through a Smartphone

I have long wanted a very small and mobile computer. Since 2008, I've maintained my EEEPC as a hobby and as a way to demonstrate the use of a highly-mobile computer. I also have observed the value of Windows 10 during the declining use of desktop computers and increasing use of mobile and tablet devices.

By 2021, I have decided that the EEEPC is too complex to maintain as a practical, mobile computer. It requires close attention to detailed update and maintenance procedures. Its supporting Linux-like operating systems, like Ubuntu, are excellent, but they have not achieved widespread use, and it is difficult to get an operating system version to run on the EEEPC. The older hardware of the EEEPC simply can't keep up with advances in operating systems or user applications. The netbook was a good idea--it provided a portable, small-scale, mobile laptop computer. Tablet computers, a variation on a netbook without an attached keyboard, provided a larger screen, modern operating systems, and served a useful purpose, but tablets have likewise not achived widespread use.

Smartphones have evolved as part of a complete communication system. Smartphones are smaller, cheaper, faster, and easier to use than netbooks. A smartphone connects by design to the Internet and phone system. Smartphone operating systems and apps are seamlessly maintained through user-oriented interfaces. Support for smartphone access to the Internet and phone system is widespread with WiFi and digital phone service providers of all kinds. The apps that run on smartphones are widely available, known, supported, and people of all backgrounds can use them easily. The ubiquity of smartphones far surpasses any other device--they are the ultimate, ultra-mobile computer.

The Cellphone as Universal Mobile Device

I now use an Android smartphone with a portable bluetooth keyboard as a complete replacement for the EEEPC or a tablet computer: 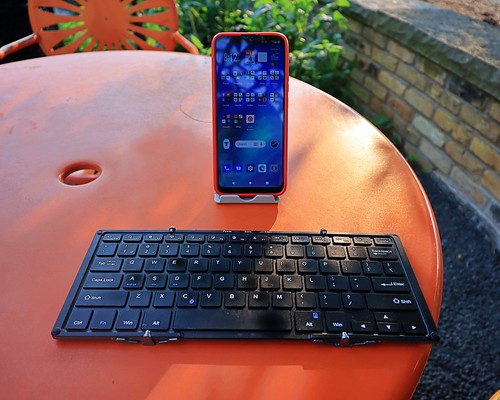 A smartphone offers a smaller screen size than the EEEPC, netbooks, or tablets, but the screen sizes of smartphones have become larger in recent years. The smaller screens are usuable through the design of apps so that is easy to accomplish a wide range of tasks. The smartphone is much more portable than the netbook. Support supplies, like power sources and cables, and portable bluetooth keyboards, are easily available and work seamlessly. Apps for the smartphone are used widely and in many cases have supplanted Web sites as a means of communication and support for a wide range of purposes.

My smartphone is a Google Pixel, and I use the Tracfone service as well as WiFi at home and outside. I also find that a compact keyboard such as Ultra-Slim Bluetooth Keyboard, measuring just 20 cm by 12.5 cm, works very well for an even more compact and portable system.

I find that the screen is big enough, the apps are agile and work well, and the bluetooth keyboard works flawlessly. Android is a free, open-source operating system developed by Google, and this contributes to the modest cost of the smartphone. While it has been nearly a quarter century since I first used my hand-held Cassiopeia, I'm come full circle to a device that I can put in my pocket, and, with a reasonably-sized bluetooth keyboard, can carry around in my pack. By the fall of 2021, stepped up my adoption of a phone as computer with the Google Pixel.