1001 Buildings You Must See Before You Die: The World's Architectural Masterpieces by Mark Irving (Editor)

This book provides brief descriptions and photos of significant buildings from around the world and throughout history. It shows how building forms have changed over time as well as what features have proven to be timeless and what features transient. The editor, Mark Irving, is a writer on art and architecture for The Financial Times. He admits the limitations of the book and its scope in the Introduction, but given these limitations, this volume is still very useful as a guide to architecture in human history.

Starting from the Newgrange Burial Chamber of 3200 BCE in County Meath, Ireland, this book surveys the ancient world, the Renaissance, and subsequent revolutions, modernism, globalism, and postmodernism. The book's final site is the Bird's Nest stadium built for the 2008 Beijing Olympics. Throughout this coverage, contributing writers provide cogent descriptions of architectural efforts. In most cases, one or more photos illustrate the buildings. The index is by building name only (making it difficult to locate buildings by architect or location).

I think the book is perhaps overstuffed with 20th century Modernism, however. Its halfway point (on page 480) is the Casa Barragán in Mexico City, built in 1948, a soulless flat, windowless hulking series of boxes. The book covers the 20th century from page 333 until page 785 (meaning that 47% of the book consists of 20th-century buildings). The editor's bias in this distribution is understandable--because those buildings represent his time, expertise, and architectural community. However, as an equal representation of worldwide building styles over centuries, this book thus inevitably falls short.

The bias of what the editor calls the "signature style" (p. 12) of the Western world dominates the book. The buildings are included because they are different--or in some cases, shocking or disturbing--as opposed to buildings that fit a social and cultural context and provide cues of use and customary features. This latter building sensibility--what I would call user-oriented architecture--is what Kunstler (2002) celebrates in The City in Mind. The former building style in which the elite architect is celebrated (self-styled "Modernism") is what Solomon (2003) lampoons in Global City Blues. More subtly, Irving denigrates non-Western building styles by the backhanded remark that they tend to engage in "copying the copy of the copy of the original" (p. 13). Irving thus frames what he sees as the dominant characteristic in non-Western (I specifically think he means non-"Modern") building styles. The idea is that buildings must shock or break with the past in order NOT to be ignored. Given this sensibility, it may become difficult to build structures and cities that meet human needs because so much effort and resources must be spent shocking or impressing a small group of elites.

Missing MAM I'm disappointed that Santiago Calatrava's addition to the Milwaukee Art Museum is not included in this volume. This notable addition, completed in 2001, was Calatrava's first US-based work and beautifully blends its engineering characteristics with the needs of art patrons and the natural beauty of its setting along Lake Michigan. 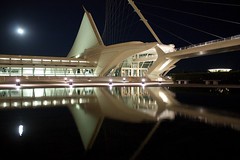 Even given this book's admitted problems in scope and bias, however, it is a pleasure to go through the photos and brief descriptions of these buildings. Highlights in this book abound, and each seems to give lessons in how buildings can serve human needs and desires. Hagia Sophia (built in 537) in Istanbul, Turkey soars above its urban surroundings with towers announcing its presence and an inviting, light-filled, glorious and beautiful interior. The Great Mosque (built in 998) in Cordoba, Spain has interior arches which suggest an infinite interior suffused with a subtle mystery that reverberates with human imagination. Notre Dame de Paris (1330) stands on its island with a facade in indescribably pleasing proportions replete with freshness and vigor. The Château de Chambord (1566) reaches skyward in an abundance of towers, chimneys, dormer windows, and turrets--an unembarrassed exuberance of form and decoration that seems timeless. The Galleria Vittorio Emanuele II (1867) in Milan, Italy presents an arch soaring above shops and cafes that instills dignity and celebratory air to the people who chose to walk and linger in its shelter. Even the Beddington Zero Energy Development (2002) in Beddington, England presents a stubborn dignity by fulfilling its mission for energy-saving apartments, workspaces, and nurseries.

The book also presents architecture that seems to embrace the ideal of shocking--or at least ignoring--the people encountering it. The Gehry House (1978) appears as a pile of rubbish--plywood, chain link fence, and corrugated metal--which I doubt would be included in this book save for its starchitect designer, Frank Gehry, who sheepishly admits "It does leak a little" (p. 611). The Whitney Museum of American Art (1966) in New York City turns its back on the street with a hulking, top-heavy, solid brick forbidding wall of which its architect Marcel Breur says represents an "independent and self-relying unit" (p. 555). Marina City (1964) in Chicago, Illinois supposedly celebrates mixed uses, but the lower part of its interesting and organically-inspired twin towers are stuffed with automobiles, the hind-ends of which turn their backs to the river and public at large--hardly the hallmark of revolting against "man made in the image of a machine" which Bertrand Goldberg, the architect states (p. 540) was his inspiration.

Irving's volume is a useful reference for what is wondrous and what fails in architecture. Notably missing are non-glamorous buildings that please users and the public. Perhaps they repeat (and renew at the same time) cultural and social yearnings in a timeless way (and thus could be accused of "copying"). Therefore, what is excluded in this volume may be more significant than what is included. Buildings that modestly--and timelessly--serve and please users and the public may never get recognized in books such as Irving's volume of shock and awe.