The Option of Urbanism: Investing in a New American Dream by Christopher B. Leinberger

"Place-based strategies that create walkable urbanism will attract the broad spectrum of talent required to build a great and vibrant economy" (p. 170).
This book is an impassioned plea for human-centered mobility. In it, author Christopher Leinberger makes the case that cities can allow, encourage, and foster places for people to walk rather than restrict resources and infrastructure to supporting automobile travel only. Leinberger explains the origins of this plea in the stark choice the world faced in the early 20th century: to continue over 5,000 years of human history when cities were built around people, or to begin an experiment in automobile-dependency based largely on marketing materials from General Motors. The choice was made for the latter, and the repercussions continued for the rest of the century and now into the 21st (see: Asphalt Nation, Global City Blues, Suburban Nation, The Wealth of Cities, City-Building in America, Geography of Nowhere, and others).
Drivable Sub-Urbanism 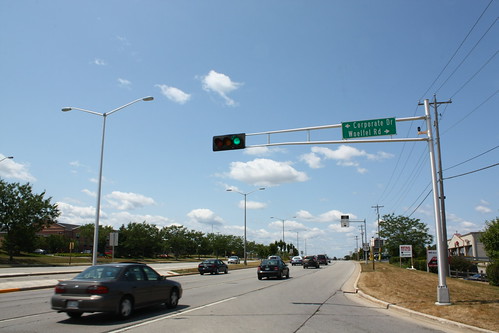 Brookfield, Wisconsin's Bluemound Road shows drivable sub-urbanism
Leinberger begins with the powerful way a monoculture of automobile-oriented transit has taken hold. From the Futurama exhibit at the 1939-1940 New York City World's Fair (pp. 15-30) to concepts in separating land uses in cities by zoning (p. 26), an emphasis on car-only transport has emerged. In an automobile-centered world, specific types of real estate products are offered, ranging from medical office, industrial warehouse, big-box anchored retail to self-storage warehouse (p. 51). The resulting drivable sub-urbanism, Leinberger admits, does have its positive points: people feel they "own" land, there are lower costs because of cheaper construction, there are lower costs because of subsidies for the low-density infrastructure, there is perceived privacy and safety, and--of course--plenty of free parking (p. 67). The negative points about drivable sub-urbanism include scarcity of transportation choice (the car being the one and only form of transit available), social problems (segregation of people into conforming and mono-cultural groups); environmental (tremendous land consumption, heat islands, water quality degradation); health problems (obesity, car accidents); and economic (debt from auto ownership and house ownership as declining-value assets, expensive maintenance costs of low-density development) (pp. 83-84). Leinberger thus recognizes the strengths and weaknesses of sub-urbanism. He is not out to eradicate it, but advocate for its balance by the choice of walkable urbanism.
Walkable Urbanism 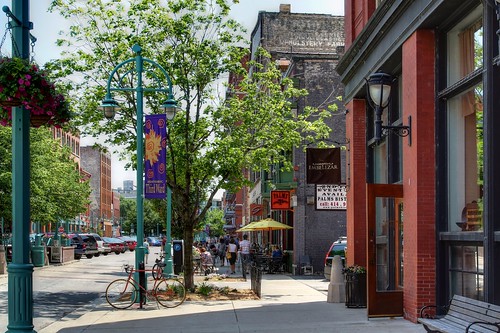 Milwaukee, Wisconsin's Third Ward shows walkable urbanism
Leinberger's strongest arguments revolve around money and demographics. Cheap oil drove sub-urbanism (p. 81). As oil becomes more costly, it influences the choices people make about where they want to live. The "drive until you qualify" idea (in which house purchasers seek cheaper land farther from the center) has different results when the price of fuel is much higher. Similarly, family size changes the equation. People with small families or living alone don't need a McMansion and may find it more appealing to have smaller living quarters closer in to amenities and options for transit. The growth of households to the year 2025 will involve the growth of childless households at a rate seven times over households with children (p. 90). These numbers--the price of fuel and the size of families and family types--seem to be strong indicators of a sea-change in the perception of value of sub-urbanism. Again, it is important to note that Leinberger does not suggest that sub-urbanism will (or should) disappear from the earth, as it seems to fit the needs and preferences of many people for lifestyle.

Leinberger's analysis of television shows as reflecting or motivating perception of the built environment (pp. 86-87) seems a bit more of an interesting sidelight, and is far weaker in advancing his argument than oil and demographics. In brief, he argues that "Leave it to Beaver" has lead to "Seinfeld" and "The Brady Bunch" has led to "Friends"--shows in which viewers see different settings on which imaginative (and I would say unrealistic) depictions of either sub-urban or urban life are played out. However, consumer preference research (pp. 92-93) has shown that a sizable group (88%) of participants preferred some other choice than sub-urbanism. Thus, the imaginative worlds of televison may reflect the desire many people have for multiple choices (p. 91) in living arrangements where they would settle.

The use of FAR ("Floor area ratio") is a very revealing indicator of land use patterns (p. 113). FAR is the amount of building (heated/cooled space) floor area in proportion to the amount of land on which the structure sits. This includes the sum of all area on all floors of the building. So a ten-story building with each floor being 200 square meters which sits on a 500 square meter lot has an FAR = 10 * 200 / 500 = 4. A one-story building of 500 square meters on a 1,000 square meter lot has an FAR = 1 * 500 / 1,000 = 0.5. This FAR helps us understand density patterns. Sub-urban FAR ranges around 0.005 and 0.3 and walkable urbanism's FAR ranges around 0.8 and 40. Leinberger observes that "The least dense walkable urban place is at least several times as dense as the most dense drivable sub-urban place." (p. 114)

The author continues land use analysis in terms of automobiles versus pedestrians. He describes a powerful "50:1 lever" (p. 116): the land amount taken up by cars in suburbs is 50-100 times the land used for pedestrians in walkable urbanism. This "tremendous lever" shows how development patterns are driven to either end of this pattern (either to support the car or to support the human). Leinberger shows how vast amounts of surfacing parking and roads lead to low density. This corresponds to Donald Shoup's work in The High Cost of Free Parking.

The incremental implications for growth are also a useful way to analyze land use. The author points out (p. 130) that, in the suburbs there is a mentality of "more is less." That is, the addition of new replications of existing stores or homes moves development even farther out, increases the supply, and hence the value of existing features falls. People resist any kind of additional development (my idea that this is perhaps out of a desire to maintain the scarcity and thus value of their own property). But in walkable urbanism, the idea is "the more the merrier" (p. 132): more attractions and destinations in compact development attracts involves more people using the street, and businesses have more potential customers. The intrinsic nature of walkable urbanism is the value of density and abundance. This corresponds to Kyle Ezell's portrayal of urban life in Get Urban!

Throughout the book, the author advocates for a multiple choices, not just "drivable sub-urban development, [to] be dictated, subsidized, and provided as the only option" (p. 137). This range of choices can be a boon to an area's economy. He strongly chides political leaders who seek "fancy economic development strategies, such as developing a biomedical cluster, an aerospace cluster, or whatever the current economic development 'flavor of the month' might be" because these efforts "do not hold a candle to the power of a great walkable urban place" (p. 170).