Waiting on a Train: The Embattled Future of Passenger Rail Service--A Year Spent Riding across America by James McCommons

Before reading this book, I mistook its forlorn title as an expression of the author's relentless disappointment with traveling around America by train. But on reading this engaging travelogue and overview of American passenger rail, I discovered James McCommons' much more encouraging truth: the inherent efficiencies and appeal of train travel plus the good work of some conscientious employees of Amtrak and other railroads adds up to a system that, at times, delivers quite appealing train trips.

The strength of this book is its overview of passenger rail, showing the public policy and operational issues involved while at the same time evoking the experience of train travel. McCommons shows how train travel is treated differently than other transportation modes. He also shows why the experience of train travel is qualitatively different than automobile travel. For example, the author finds that after a long train trip, "What I really wanted to do was read the newspaper, nap sit down to dinner, and not have to pay attention. After all the train time, driving seemed like such a waste." (p. 271).

McCommons' account certainly does not show that American passenger rail succeeds on a consistent basis, or that it will survive many more years. Indeed, his book's main point is that Amtrak is funded on requirements that are impossible to achieve running on infrastructure that is out of its control with inadequate equipment in the face of highly-favorable treatment and subsidies of its competitors--highway and air travel--which enjoy absolute dominance on 100% government-run and taxpayer-funded infrastructure (interstate highways and public airports). However, McCommons illustrates how pockets of competence and success in today's rail passenger service could be be built upon.

James Howard Kunstler's forward frames this book in terms of a sea-change in how transportation will have to be done in this country. Kunstler's advice is that we must rely less on fossil fuels and the tremendous public and private debt-fueled project of suburban sprawl and car-dependency. This forward reminds us that the future will be different than the past, and any politician who wants to address 21st-century transportation with 1950s-style autos-and-asphalt dogma is foolish. 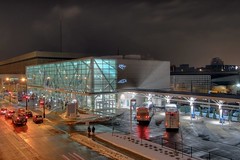 "Intermodality is at the center of the downtown Milwaukee station, which houses Amtrak and several bus companies. Finished in 2006 at a cost of $16 million, the gleaming, all-glass building makes an architectural statement and complements the modernistic look of the neighboring art museum." -- p. 71.
McCommons organizes his book into regions of the country and narrates his travels by train (and other modes at times) to meet with rail officials, employees, passengers, and avid rail fans. Highlights include positive stories of on-time trains: "As a commuter service, the Hiawatha [Amtrak service between Milwaukee and Chicago] has been a great success, covering the 90-mile trip in 90 minutes with an on-time performance exceeding 90 percent." (p. 63).

McComons writing also beautifully evokes the scenic wonder that a train trip can provide: "The red light of dawn lit up their summits and then spread down and out across a range of land of sagebrush and bunch grasses. The train rumbled over dry washes and flushed waves of swallows nesting beneath the bridges and trestles." (p. 159). He also reveals the reality of catching a train. The connections to the nearest train station from rural America can be tough: an all-night bus from Michigan's Upper Peninsula to the nearest train station in Milwaukee (p. 71). And the social environment of the trains is not exactly always decorous: on the Texas Eagle, passengers "went to the lounge, and pounded beers all afternoon," prompting Trains magazine Matt Van Hattem to declare it was like "'being on a train with Jerry Springer, his guests, and the audience'"(p. 197). Further, rude Amtrak employees do not help. One Amtrak employee dismissed the author's concerns about the temperature in a passenger area with indifference (p. 276). This embarrassment is summed up best by McCommons' statement, "America is a third-world country when it comes to passenger railroads." (p. 277).

The author deftly brings in the rail history that helps give insight into his main point: rail flourished after being introduced in 1830s because of the tremendous distances it could surmount quickly, an ascendance that was a paradigm shift that historian John Hankey compared to the rise of the Internet in the 1990s (p. 108). What happened was that passenger rail declined because of the ascendance of taxpayer-funded, government-run, public interstate highway system that had a locked-in "perpetual motion [money] machine" for eternal funding, construction, maintenance, and extension (pp. 111-112) through taxes, tolls, and general taxpayer funds. Passenger rail, although it had formed an astounding level of service to passengers for decades, declined in the face of this government-run highway system's competition, and the railroads still providing passenger service simply wanted it to go away. Amtrak was formed in 1971 to save the railroads from having to serve passengers based on their obligations as a common carrier regulated by the Interstate Commerce Commission (p. 21). The railroads became obligated to carry Amtrak trains in exchange for having to operate those trains. This agreement shows up throughout this book as the major cause of delays on the rails: the commercial railroads simply want to make more money carrying freight (which is profitable) versus gaining only modest fees from Amtrak for using the track. As a result, "... [Amtrak] has never made a profit and hasn't weaned itself from federal government subsidies, which is no surprise to informed observers of the rail industry." (p. 23).

"Trains penetrated the wilderness, moved goods and people, tied together a nation, helped win a civil war and later two world wars, and created a modern, mobile industrial society." p. xv.
Even in the face of this imbalance, Amtrak does do well at times: "On the Northeast Corridor, it has the largest market share of business travelers between New York, Philadelphia, and Washington and has outcompeted the shuttles run by the airlines." (p. 23). The state of California "has accomplished a level of connectivity and intermodality in intercity public transportation unmatched anywhere else in the United States" (p. 126). And technology has advanced: the use of Positive Train Control can automatically stop or slow a train in cases of engineer error (p. 52).

Many say: if train travel is so good, why can't it operate at a profit? I say, if it is so bad, why do alternate forms of transit (automobile industry) gets so many bailouts and taxpayer subsidies at all levels including the government-run, government-controlled, taxpayer-subsidized interstate highway system? In other words, I wonder: why can't passenger rail have a level playing field and enjoy at least part of the subsidy that the auto infrastructure enjoys daily?