Dead End: Suburban Sprawl and the Rebirth of American Urbanism by Benjamin Ross

"Today our governance of land use sanctions individual greed and collective snobbery and denies us the power to mold the human landscape to our intentions." p. 210.

This book provides a cogent, concise, insightful history of suburban sprawl and recent trends toward the rebirth of urbanism. I would highly recommend this book to anyone involved in urban or transit advocacy.

While this book's weakness might be that it "preaches to the choir, it nonetheless strongly appeals to and strengthens the arguments in favor of urbanism. It is the best, most recent summary of the history of suburbanization covered in some degree elsewhere (Asphalt Nation, Suburban Nation, Sprawl Kills, The End of the Suburbs, Global City Blues) and breaks ground in the specifics of transit advocacy case studies and analysis of the language of land use. Most importantly, Ross takes an attitude, at the end, that is decidedly optimistic: he shows that, if the democratic process is tried in land use decisions, better results can be possible (see also The Wealth of Cities, Triumph of the City, and The Option of Urbanism). Ross's book uniquely identifies and discusses suburban land tenure in depth (a system of embalming suburban-style ideals in all land decisions) as a chief drag on urban development. 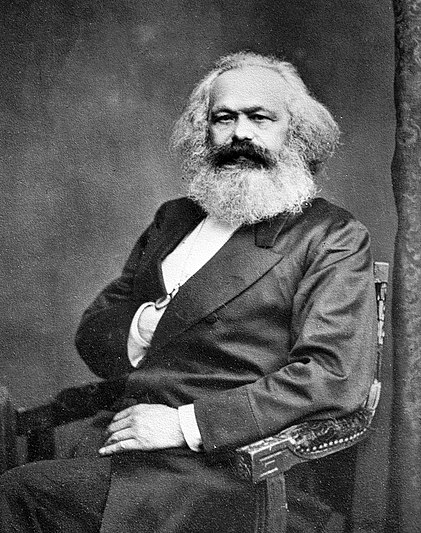 Karl Marx: an advocate of the ideals behind the American suburb (p. 10). (Source: wikipedia.org.)

One of the keys to understanding this book is the land tenure system. In brief, covenants and zoning make it possible for landowner's to enforce property rights beyond their own property--to dictate and restrict what people can build and do on neighboring land (p. 22) which includes city land (p. 78). The pillars of suburban land tenure are: zoning, covenants, and historic preservation (p. 180). The result of this land tenure system is that people in an area can be powerful as nimby's (people who advocate "Not In My Backyard" attitudes to any change in property use). What happens is that cities essentially get "embalmed" (p. 37) and that efforts to create more dense, mixed-use urban projects and apartments (p. 104) get rejected by nearby landowners. This land tenure system shatters prior concepts of land ownership and makes only the lowest-grade types of development (single family houses, strip malls) easily buildable. It drives up the cost of unique, dense, or affordable developments so much that people don't even try to build them.

This book begins by covering the origins of the suburbs in concepts of "homes in the country" as exclusive and prestigious locales. Then Ross traces how this concept changed over time by planners, government, developers, and suburban residents to become the kind of sprawl described in the later 20th century. The 21st century saw a "new thirst for city life" (p. 126) which itself faced backlash from the right (p. 139) and increasing critical attention as well as modest success. The author is optimistic about demonstrated successful examples of affordable housing (p. 189) and the promise of rail travel (p. 207) to reinvigorate urban areas.

Ross provides a taxonomy of five forms of governance that enter the mix in land use decisions: snob zoning, industrial cities, tollbooth regulation, fiscal zoning, and bureaucratic 'paralysis by analysis' (p. 117). These forms interact generally to restrict who can live in an area, embalm an area in its present form, and attempt to keep people of lesser social status out of an area.

I felt his chapter on language and land use (chapter 12, pp. 150-156) is particularly useful because it helps convey what has happened in public debate about land use. Terms such as "exemplary" lose their meaning of "laudable examples that deserve emulation" to mean "an example," so that landowners around a strip mall can call it "exemplary" and thus "embalm the ordinary." (p. 154). Another very strong chapter is 13, "Breaking New Ground" (pp. 157-171) in which he describes how the transit advocates he led brought back a light rail project in Maryland.

The direction the author advocates in the end--overturning suburban land tenure (p. 180) by introducing democratic features into decision-making about land--is promising, but might not be possible in the United States. Ross also lauds efforts of the New Urbanists for form-based codes, in which the size and placement, and shape of buildings rather than what goes inside them (p. 181) and to break up control of large chunks of land so that more complexity can develop (p. 181).

This book prompts some great questions--a few big questions I have at the end of reading this book:

What is beyond the Dead End? I think the answer is this: Urban prosperity achieved by unleashing the inherent energy of cities through the democratic processes of breaking up of monopolies of control. In brief, like an alcoholic "hitting bottom," urban areas either have to improve or enter some apocalyptic/post-industrial state. We need cities--they have been in human history for thousands of years (Reader 2004). Ross' initial narration showed how the ideals of the suburbs quickly gave way to a kind of Ponzi scheme can can be unraveled only if cities provide many choices and that these choices emerge from a democratic process in which not just current landowners, covenants, and the land tenure system have a say but the people who are not currently served by the city are taken into consideration.

In other words--current landowners, current property owners shouldn't be able to restrict the supply of diverse and plenteous opportunities for housing and business out of a desire to just keep out the riffraff and restrict the supply, but the needs of people who are presently ill-housed or not housed in a city should be considered. It is as if a group of people are enjoying a large feast at a long table and a vote is taken on this: should more chairs be brought to the table? Well, the folks currently at the table might not want anyone else competing with their feast--and, since the people not at the table don't get a vote, why would the people at the table vote for more places at the table? This is the essential question of Ross' suburban land tenure observation--why do people get to restrict/embalm nearby land to the most mundane of uses (single family/strip malls/parking lots/automobile dependency)?

Who speaks for the people who are not there, who are invisible to decision-makers, or who are not currently being served in a city?